Video games are mostly about visuals and cool gameplay mechanics. However, an often overlooked part of any game is music. Evergreen releases such as Zelda, Final Fantasy, or Silent Hill simply wouldn’t have been the same without their respective soundtracks. But, we are not here to talk about music in games. The music itself has found its way of being a theme in many other forms of entertainment, and in this article, we will discuss some of the best music-based games of all time.

Matching you with some of the most legendary guitarists of all time, Guitar Hero series gives you a chance to be a rock star in front of your console or PC. The goal of this game is to timely press five differently-colored buttons on a guitar-shaped controller while the song plays in the background. It was released in 2005, featuring 30 popular rock song covers. There have been numerous sequels to Guitar Hero since, which introduced some new songs and instruments.

Taking inspiration from karaoke machines, SingStar is an exciting singing game for all age groups. While karaoke is just for fun, SingStar brings competitiveness to this type of entertainment. The game requires you to sing along to different hits to the best of your abilities and score points. The more accurate the pitch, the more points you get. The game’s newest release called SingStar Celebration features over 30 pop classics. 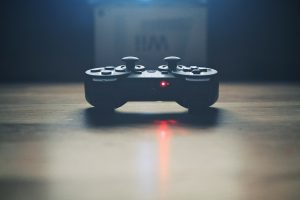 Audiosurf is a puzzle game where you collect multi-colored blocks on a runway with a levitating vehicle. The blocks are put in order to match the song’s rhythm. Switch between three lanes with your mouse or arrow keys on a keyboard to get the best possible score. The best thing about Audiosurf is that it lets you upload and play any song from your playlist, which is then broken down into patterns represented by the collectable blocks.

Also known as Dancing Stage, this game requires from a player to timely step on four arrowed fields. The arrows on the screen are constantly falling down, and you need to step on a dancing pad and hit the arrows in order with accurate timing. While this game is playable for most people, the hard mode can be ruthless and will require a lot of practice and some quick feet.

Being the only indie game on our list, Sentris puts you on a puzzle task to make your own soundtrack. Drop the correct notes on rotating loops and hear as the song slowly comes together. Switch between different instruments like synth, drums, and bass, and be free to experiment and customize your creation.